The chateau surrounded by a large park embellishes the town of Strážnice. Its Neo-Renaissance appearance with classicistic elements dates back to the mid-19th century.

In rooms that are open to the public the visitors can see the historical library, which includes 13 000 books, and the permanent exhibition “Folk Music Instruments in the Czech Republic”, which is the only one of its kind in Central Europe. Many visitors shall for sure find the annual exhibitions in the Chateau gallery interesting. Three parlours, the pink, the green and the yellow one, are used for concerts and other cultural events.

The chateau accommodates also interiors that are currently renovated; it is the chateau chapel with a historically valuable altar that has been made accessible to the visitors lately. 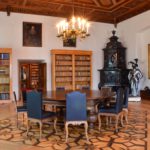 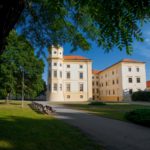 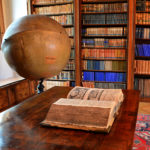 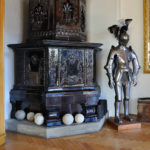 The site where the chateau stands today was originally covered by a stronghold, a guarding station at the Moravian-Hungarian border.  This gave name to the today´s city of Strážnice (guard – strážit). Before the original water castle could be converted into a representative seat, the dominion underwent many historical changes.

The first mentions date from the 14th century; at that time the first owners – the Lords from Kravaře – were reminded. They carried out the first reconstruction of the original stronghold, and around the year 1450 they built the western wing of the chateau. A remainder of the fortification is preserved in the ramparts with the Gothic-style Black Gate. From the year 1501, the chateau was owned by the Lords of Žerotín, who had the eastern and the connecting northern wing, decorated with Renaissance arcades, added to the chateau.

After the Battle of the White Mountain, it was the House of Magnis that became the last owner of the Strážnice dominion. The House of Magnis contributed to the today´s appearance of the chateau, as well as to the foundation of its large English-style park to which they had exotic plants delivered. Even today Strážnice prides itself on the beautiful plane-tree alley; it is said to be the longest one in Central Europe.

Currently, the chateau is seat of the National Institute of Folk Culture, which also administers listed items and buildings, among other things, not only in the chateau, but also in the park and the Open-Air Museum of Rural Architecture of South-East Moravia.

Your ticket for: Chateau History